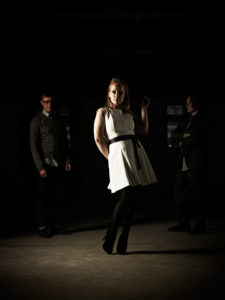 Belleruche aren’t strictly ‘New Music’, seeing as they’ve been making albums and playing gigs for about five years, but this is probably the first time many of you will have heard them.

Now onto their fourth album, called Rollerchain (out in May), ‘Stormbird’ is a fantastic showcase of Belleruche’s unique sound – forged using equal parts of jazz, electro, blues and punk. In fact, listening to their set of songs on Soundcloud (http://soundcloud.com/Belleruche) they sound like the new Moloko.

‘Stormbird’ is a captivating, tempo-shifting pop song which breezes effortlessly along, and has that special knack of sounding slightly different, and better, everytime you listen to it.

Belleruche definitely seem to be a band on the up, with forthcoming album Rollerchain their make-or-break chance to gatecrash the party and make a name for themselves. On the evidence of what we’ve heard so far, that doesn’t seem unlikely.