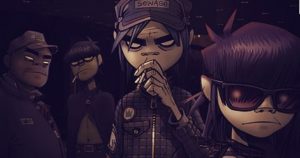 Gorillaz Doncamatic (All Played Out)

The Gorillaz are a busy bunch.  Only a few days after Damon Albarn said they are recording a new ‘lo-fi’ album while dragging the ‘Escape To Plastic Beach World Tour’ across Amercia, we get a new single out of nowhere.

While most Gorillaz fans would have been happier with the release, and accompanying video, of Plastic Beach’s ‘Rhinestone Eyes’, it appears that Gorillaz are keen to move on from their third album and look to the future.  The fact that ‘Doncamatic’ addresses the criticisms of Plastic Beach, mainly that it lacked enough pop songs, also suggests Damon and co have gone on the offensive to show that they haven’t lost those famed pop sensibilities after all.

Featuring little-known singer Daley on vocals, ‘Doncamatic’ is a typical Gorillaz pop song in that it manages to sound completely different to anything they’ve done before but is still unmistakeably Gorillaz.  Like their other big pop songs it also takes a while to get into, but once the melody gets in your head it is impossible to forget.  Bouncing along on a swampy, lo-fi synth beat, the song is a simple but highly infectious pop song that makes the most of Daley’s unique and soulful voice.

Check out the video, and get ready to be singing the chorus all week!

1 thought on “Gorillaz Single Review – Doncamatic (All Played Out)”