Reading and Leeds 2014: First headliners to be announced next week – here are the top rumours

Reading and Leeds Festival organisers have announced that they will reveal the first headliners for next years festial next Monday (2 December).

The have also revealed details of a new £50 deposit scheme – so festival goers can reserve their space with a £50 down payment. The deposit scheme will launch at 9am on Tuesday 3 December – the day after the first headliner announcement.

Here’s all the details on the £50 scheme from the official Reading Festival website.

So, who is going to be headlining the two festivals in 2014?

Black Sabbath have been rumoured heavily over the past few months – and they are the only band I can think of off the top of my head who fit the ‘band with members from both sides of the pond in them’, as they have US touring musicians playing with them.

Other rumours that have been circling for a while are Arctic Monkeys (obviously), but I don’t know whether their recent unveiling for T In The Park makes them less or more likely to also be headlining Reading and Leeds?

Queens Of The Stone Age could also be a good shout, particularly as their current arena tour has established them as one of the biggest rock acts in the world.

Kanye West is another rumour, but he has been rumoured for every UK festival for the past few years – people just seem to be so desperate to get him over here in the summer! If he was going to headline a festival it would probably be Glastonbury, but Reading and Leeds have a history for offering stupid money to some headliners so Kanye could be an outside chance.

Other potentials are Paramore (are they big enough to headline?) and Foals – who have been making noises about headlining a big festival soon so don’t rule them out.

Who would you like to see topping the bill at next years Reading and Leeds festivals? Join the discussion in the comments below…

The below line-up poster is currently doing the rounds on social media, which looks pretty real to me – with Paramore, Arctic Monkeys and Pearl Jam as the headliners. What do you guys think? 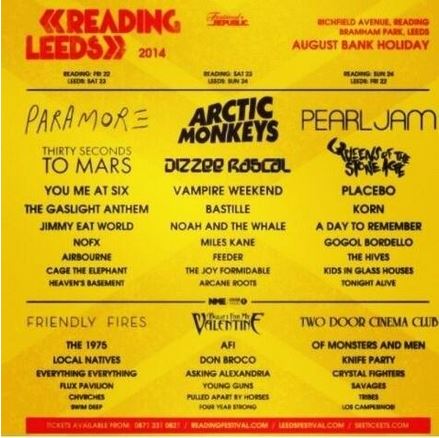