Last night was the inaugural YouTube Music Awards, or YTMAs as they so desperately want people to refer to them as, and despite YouTube being the premier music consumption site in the world the interest in the awards didn’t seem to be that great.

The run-up to the awards ceremony was over-shadowed by the likes of Flying Lotus and Tyler, The Creator (both nominees) criticising it as ‘pointless’ – so that probably didn’t help – and the fact it wasn’t televised is also a potential factor for why it didn’t seem to get much coverage.

Digital Music News have pulled the stats together which tell a story much worse than we could have imagined, suggesting at its peak only 220,000 people were live streaming the ceremony – which is a bit pathetic really. They’ve made the below graph that kind of unfairly compares the peak viewing figures of the YTMAs with the total viewers of this years VMAs (by MTV) – but it still demonstrates the work YouTube still have to do to make a success of their new awards format: 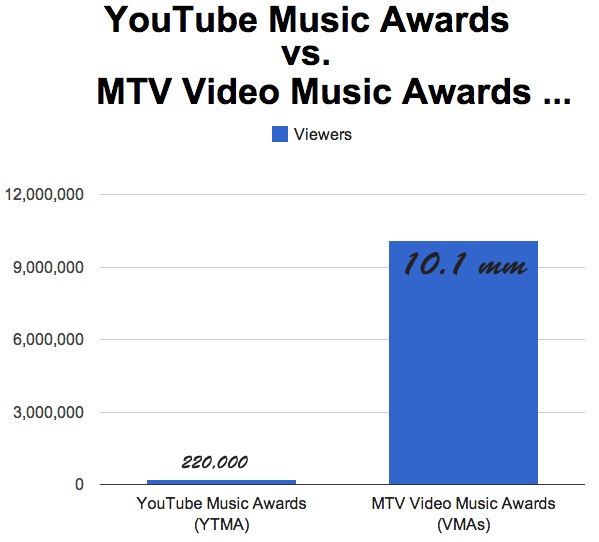 Poor viewing figures aside, there were some interesting appearances during the ceremony – most notably from Arcade Fire (‘Afterlife’), MIA (‘Come Walk With Me’) and Tyler and Earl Sweatshirt (‘Sasquatch’). You can watch those performances and the full list of awards winners below. Click here to see all the highlights.

Artist of the Year:
Eminem

Response of the Year:
Lindsey Stirling and Pentatonix ­- “Radioactive”

Innovation of the Year:
DeStorm ­- “See Me Standing”