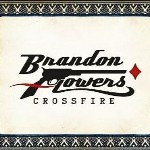 The Killers front-man embarks on his solo career with the first single from forthcoming album Flamingo, and after listening to it you have to ask – why bother?  Usually a solo project frees up a musician to explore different directions – but instead of going a bit electro or full-on country, ‘Crossfire’ sounds exactly like The Killers.

This is obviously not a bad thing – if anything, ‘Crossfire’ is a bit better than most of Day & Age.  It has a well-paced, cinematic feel to it and boasts a belter of a sing-a-long chorus.  But you do have to question why the rest of the band are not involved in something so accomplished and assured.

The personal aspect of the lyrics may go some way to explaining why the other Killers aren’t involved – perhaps they weren’t too keen to be a part of an album full of love-songs to Mrs Flowers!  Or maybe they all just fancy a break while Brandon gets a few creative urges out of his system.  Whatever the reason, if ‘Crossfire’ is anything to go by then we can expect Flamingo to be an assured, confident and personal record that sounds like The Killers.  A bit like Sam’s Town then!

The Chemical Brothers – Another World

After dispensing with star name collaborators for their new album Further, beat-masters The Chemical Brothers became the latest dance act to revive their careers and win over a new generation of fans.

New single ‘Another World’ is a delicately beautiful slice of chill-out trance and is a great example of why their new approach of not using big-name singers is working.  The whispered vocals and swirling synths are given space to breathe and influence the track without the over-bearing presence of a scene stealing collaborator.

‘Another World’ is similar in tone to their other ambient hit, ‘Star Guitar’, and has a similarly inventive video:

Hotly-tipped Manchester electro duo Hurts have already started to allude to inspiring a new Madchester scene in interviews.  But on the evidence of new single ‘Wonderful Life’ their influences lie more in the drama of the early New Romantics scene than the baggy acid house of the late Eighties.

‘Wonderful Life’ plays like a Depeche Mode or Human League song – a narrative with a moral attached wrapped around emotive synths and stirring percussion.  Theo Hutchcraft’s deep, powerful and distinctive vocals stand out and could be the secret weapon that ensures Hurts stand out among the crowd.

The Pretty Reckless – Miss Nothing

With so many American actresses moving into the pop world, you can’t really blame Gossip Girl star Taylor Momsen for following Jared Leto down the wannabe rock star road in a bid to stand out.  You can, however, blame her for making such a desperate mess of it.  While trying to look and sound like a young Courtney Love, she succeeds in resembling Paris Hilton at a Halloween party – and displays about the same amount of charisma.

To make it worse, ‘Miss Nothing’ is pure bubble-gum pop in all but name – relying solely on the ‘catchy’ chorus and Taylor’s heavily accentuated vocals – and is instantly forgettable.

The UK hip-hop scene is starting to dominate the mainstream and is becoming our biggest musical export.  The likes of Dizzee, Tinchy and N-Dubz are all riding high with their unique blend of hip-hop, grime, dancehall and R’n’B.  London born rapper and producer Taio Cruz is one of the king-pins of the current scene, and he shows off his impeccable pop credentials once again with new single ‘Dynamite’.

With a catchy dance riff taken straight from the Calvin Harris book of club bangers and infectious but nonsensical lyrics about lighting up clubs and throwing hands up in the hair, Taio is sure to have another massive hit on his hands.