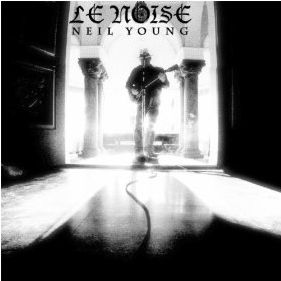 Neil Young has always been a restless musician – his prolific song-writing and adventurous out-law spirit has led him down many different musical paths throughout his career, as well as seeing him leave a lot of musical partners by the wayside.   This single-minded, often reckless approach to making music is part of Young’s enduring appeal, and is the reason the Canadian remains one of the most prominent and influential singer-songwriters of his generation.  Sometimes he gets it wrong (80’s electro turkey Trans a case in point); but whether negative or positive, his musical experimentation never fails to elicit a strong response.

His new album Le Noise, named after its famed producer Daniel Lanois, is a simple record which plays out like a snapshot of where Young as an artist is at this point in time.  It feels as if it was hastily put together – like Lanois was keen to chronicle Young’s creative impulses before he veered off on a different tangent.  The result is arguably Neil Young’s most cohesive album since Harvest Moon, relying solely on his voice, song-writing skills and a wildly distorted electric guitar.

The stripped down format definitely benefits Young’s style – his trademark haunting vocals wail and falter over the reverb-heavy guitar and gives songs like ‘Sign Of Love’ and ‘Peaceful Vally Boulevard’ the kind of human, soulful feel that is missing from today’s auto-tuned pop stars – but to dismiss Le Noise as a simple album does producer Lanois a disservice.  He weaves the seemingly discordant and distorted guitar sounds into a hypnotic and at times haunting tapestry.  ‘Angry World’ features a brutal riff that Lanois slows down into a sumptuously layered frame for Young’s impassioned vocals, while ‘Rumblin’ uses heavy reverb to create a swirling, atmospheric album closer.

The simple and uncluttered production also lets Young’s lyrics stand-out.  Seemingly in confessional mode now he is comfortably in his mid-Sixties, Young takes on the big issues in ‘Love And War’, while admitting he still doesn’t understand either:  “When I sing about love and war / I don’t really know what I’m saying”.  Inspired no doubt by the backlash Young experienced in the US when he took on the Bush administration and the War On Terror,  it’s a heart-wrenchingly honest song which sees Young admitting his faults while all the time reminding us of his strengths.  Similarly, ‘Hitchhiker’ plays like a run-through of Young’s past indiscretions – particularly his dark days of cocaine paranoia.

Sensibly, Le Noise is limited to just eight tracks as the swirling feedback of guitars would begin to distract from Young’s primal vocals if it played out over another three or four songs.  As it is, this small album works perfectly as a showcase for Neil Young’s simple but powerful talents.