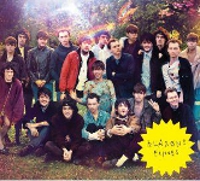 After instigating the ‘nu-rave’ movement and inspiring a host of new bands with their first album Myths Of The Near Future, Klaxons are back and eager to regain their crown as the world’s premier electro-pop psychedelics.

This didn’t get off to the best of starts earlier this year when their label rejected their second album, Surfing The Void, and ordered them back to the studio to make it more poppy and accessible.  Rather than throwing a strop and muttering “MGMT don’t have to put up with this” under their breath, they took it on the chin and dutifully produced an album that is already being touted as one of this year’s best.  That may sound a bit previous, but if first single ‘Echoes’ is anything to go by then those early predictions may not be too wide of the mark.

Anyone worried that the record label altercation may be a sign of a radical change of direction can rest assured – ‘Echoes’ is unmistakeably Klaxons.  The only change is that this feels more expansive and assured.  Similar in tone to ‘Golden Skans’ but more focussed and richly textured, ‘Echoes’ ebbs and flows along a loose bass line and furious but understated guitars.  Although the chorus sounds a bit like Delphic’s ‘Doubt’, the intensity and typically ‘out-there’ lyrics (“Echoes, from the other-world / Turn horizons, into endless ever-present”) ensure it sounds original enough.

The Charlatans – Love Is Ending

Never afraid to reinvent themselves, Madchester survivalists The Charlatans have made a career out of redefining their sound.  1997’s Tellin’ Stories blew away the baggy cobwebs and established them at the forefront of the Britpop movement – winning a host of new fans as a result.  Subsequent albums Us And Us Only and Wonderland then took them beyond the Cool Britannia hangover and confirmed their status as a national treasure.

With their new album Who We Touch just weeks away, lead single ‘Love Is Ending’ is our first glimpse into The Charlatans latest musical mindset.  The post-punk guitars of the intro turn out to be a red-herring as the song soon morphs into a straight-forward, and slightly disappointing, indie-pop song.  Tim’s distinctive vocals anchor the track and make sure old fans will love it.  We can’t see it winning many new ones though.

Kele – Everything You Wanted

With rumours abound that Bloc Party’s current hiatus might be permanent, front-man Kele’s solo career continues with the release of new single ‘Everything You Wanted’.

About an imploding relationship, Kele’s vocals sound soulful and impassioned enough – but on the whole you can’t help but think this would sound a lot better if his band-mates were involved.    The electro soundscape providing the backdrop to the song feels a bit cold and lacks the emotional depth that underpinned Bloc Party’s sound.

They may have a male drummer and female guitarist who share vocal duties, but the label of ‘the grungy Ting Tings’ that follows this Brighton duo about doesn’t begin to do them justice.  Taken from second album Fire Like This, ‘Heartsink’ boasts one of the strongest and most identifiable riffs this year and the sort of catchy vocal line that demands your full attention all the way through.

Blood Red Shoes are criminally underrated at the moment, but if trends are chronological we could be due an early 90’s grunge revival once the current 80s fascination fizzles out – which should see these two elevated into the mainstream.

These current superstar DJ’s are gaining a reputation for banging out powerful club anthems loaded with emotion.  Featuring rising star Mali on vocals, ‘Let You Go’ is another high energy track destined to pack out dance-floors over the coming months.

Although it’s not the most original track you’ll ever hear, it could easily be mistaken for Pendulum, ‘Let You Go’ is still an entertaining and diverting 4 minutes of head-banging fun.