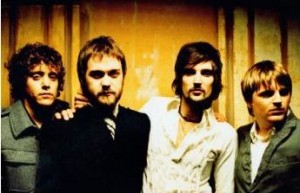 Kasabian bassist Chris Edwards was out celebrating his charity bike ride last night with a fundraising do in his hometown of Leicester.  Chris, along with his brother Jay, took on the mammoth task of cycling from Lands End to John O’Groats to raise money for the Teenage Cancer Trust – and he took time out from celebrating to chat to All-Noise about the bike ride.  Chris described the ride as ‘excruciatingly painful’ but went on to say it was ‘well worth it’:

“I’ve always wanted to do the ride for charity – so with Kasabian on a bit of a break I thought: why not cycle a thousand miles!  It ended up being excruciatingly painful – I’ve spent the last three days on painkillers – but making so much money for charity makes it well worth it.”

Last night’s fund raising effort saw the Leicester band auction items including signed guitars – helping to raise an extra £16,000 for the charity, something Chris was ‘ecstatic’ about.

Front-man Tom Meighan was also in attendance to help with the fund-raising, and celebrating, and had this to say about his band-mates efforts:

Tom also went on to tell us about Kasabian’s current plans to take a break as ‘everyone’s having babies – we’re all growing up!’ When asked about the bands recent Q award nomination for ‘Best Act In The World Right Now’, Tom said:

“It’s a weird one – strange.  Tell you what though, the best act in the world right now is the Pope – no-one else comes close!”

Chris and Jay have set up a fundraising page on the TCT site, if you would like to donate.