They may have made us wait two years for their debut album, but Manchester band Egyptian Hip Hop are starting to repay their fans’ faith – first with the release of the brilliant Good Don’t Sleep, and now with a six-date headline UK tour.

As part of a huge 24-date European tour that runs from February to March next year (check out the tour poster below), the band will play the following UK dates:

Tickets go on sale tomorrow (Tuesday 13 November) at 9am.

Egyptian Hip Hop have also recently released a dreamy remix of their single ‘Yoro Diallo’ by Lone, which you can hear right here:

Here’s the full Egyptian Hip Hop 2013 European tour poster with all the dates: 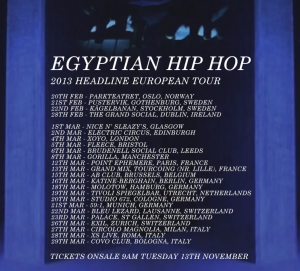